Could Selecting Representatives by a Lottery Actually Work Better than Elections? 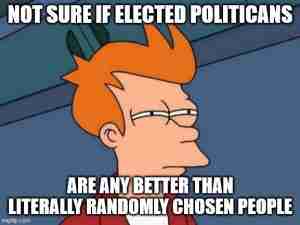 Here's a crazy idea. What if instead of electing politicians to office, we instead selected them literally by random similarly to jury duty? Sounds pretty crazy right?

Yet many studies have shown that this kind of lottery:

This kind of democratic lottery uses a technique called "deliberative democracy", based on a simple premise. Give normal people time, money, resources, and expertise. Then, they are capable of making better informed decisions.

The common narrative of today is that democracy has failed. People are stupid and make stupid decisions, both in their daily lives and at the ballot box. These dumb people voted for Trump, or they voted for Biden, and therefore they cannot be trusted. Therefore, it’s time to get rid of democracy!

Fortunately according to the top academic journal Science Magazine (2019) [1],

“Deliberative experimentation has generated empirical research that refutes many of the more pessimistic claims about the citizenry’s ability to make sound judgments…. Ordinary people are capable of high-quality deliberation, especially when deliberative processes are well-arranged: when they include the provision of balanced information, expert testimony, and oversight by a facilitator."

So How Does It Work?

This process resembles typical legislative procedures practiced in governments throughout the world but with a key difference. Deliberative democratic assemblies are composed of normal members of the public using a process known as "sortition", or the selection of representatives by lottery.

The second key difference between other assemblies is that unlike “Town-hall-style” democracy, the randomly chosen participants are paid a wage for their time and efforts. Wages are key in reducing the economic barriers to participating in democracy. Deliberation also happens on the time scale of many days to months rather than your evening off.

With random selection and wages paid for work rendered, the process of deliberation becomes democratized to achieve a sort of equality of probability of selection.

What have Citizens Decided?

After interest in sortition and deliberation surged in the 2000’s, hundreds of deliberative experiments such as Citizens' Assemblies have been conducted. For example:

Time and time again, normal citizens are able to come to compromise and consensus in ways that elected politicians cannot. In nearly all deliberative events, participants are highly satisfied with the experience and the level of respect achieved after deliberation.

We elect and pay our Congressmen to do the deliberation for us. If deliberation is so great, why is Congress so dysfunctional?

The Virtues of Lottery

Unlike elections, random selection of citizens brings forth powerful statistical techniques in order to construct a representative assembly that looks like everyday citizens. When you use random lottery to choose 500 people, the body generated will predictably resemble the rest of the population. Imagine a Congress that actually looks like America. It's filled with nurses, farmers, engineers, waitresses, teachers, accountants, pastors, soldiers, stay-at-home-parents, and retirees. They are conservatives, liberals, and moderates from all parts of the country and all walks of life. That's what lottery gets you.

With a scientific sample, we can now scale deliberative democratic methods to a manageable size of people. Conducting deliberation among 1 million participants is an impossible task. Random statistical sampling reduces the number of participants, and therefore enables face-to-face deliberation, the hiring of experts and educational resources, payment of participants for their time, and the capability to participate for long periods of time on the scale of days, months, or even years.

The Perils of Elections

Elected politicians are chosen through an extreme filtering process, where they may:

This filtering process typically biases the preference of politicians in favor of elite special interests at the expense of the public good.

Most of us are also incapable of meaningfully monitoring politicians without the time nor resources to do so. Even if we are highly technically informed about a policy, we may be ignorant on our elected representative’s sincerity in advocating for that policy (Without being physically in the office looking over a politician’s shoulder, how can we be sure?). We might use a proxy such as a social media personality, or a television news network, or a political endorsement, to perform the monitoring for us. Unfortunately the art of choosing a good proxy is just as difficult as monitoring a politician, leading normal people to make ignorant choices. With the inability to monitor, normal people are then unable to meaningfully hold politicians accountable for their actions.

Envisioning the Next Steps for Deliberative Democracy

The experiments in deliberative democracy, though they have proven the capability of normal citizens to come to good judgments, unfortunately have yet to convince many politicians. The verdicts of Citizens’ Assemblies and deliberative polls are routinely ignored by lawmakers who instead may feel forced to ally themselves to special interests, power brokers, and financial backers.

If normal citizens are capable of making good political decisions without politicians, then why do we need elected politicians anyways? Many political theorists have come to the conclusion that at the very least, randomly selected deliberative bodies could be added to political systems to greatly enhance decision making.

The Future of Democracy is Deliberative Democracy

So in contrast to the doomsayers predicting the retreat of democracy, we now have a powerful new weapon to reinvent a democracy fit for the 21st century.